Swachh Bharat Abhiyan is a cleanliness mass movement organized by the government of India and takes into action by Prime Minister Narender Modi. This is the most valuable expedition which everyone must be aware of for the bright future of India. Following the footprints of this compaign not directly but linked to it Samuday, a unique initiative of HCL Foundation for integrated and sustainable community development in rural areas has started in Uttar Pradesh, aims to build model villages in partnership with the Central and state governments, local communities, NGOs, knowledge institutions and allied partners.

A significant role in the conceptualisation and creation of Project Samuday in 2014 and now oversees the strategy and working of the project by Navpreet Kaur, Director of Samuday. With a team of over 500 people, Samuday is focused on development in six sectors, including education, health, water and sanitation, livelihoods, agriculture and infrastructure across three blocks of Hardoi district in Uttar Pradesh.

“So, we signed an MOU with the state government and a many demographic studies were conducted and Hardoi came out as one of the most backward districts of the country. So, that is how Hardoi was chosen, and within Hardoi, we chose three blocks — Kachhauna, Behandar and Kothawan — and started working there. At first, we started meeting with the people in the community, asking them about their problems. We chose six sectors where we needed to work — agriculture, education, health, infrastructure, livelihood, water and sanitation,”added Kaur. For agriculture, Kaur said, “We started improving the techniques and traditional cropping, plus, we started working on crop diversification. The impact is that vegetables people have almost started earning you know three times more than what they used to earn initially had. There is a concept of happy school that we have developed which aims that they don’t just come there to learn but also to create a happy environment. Then, we have also started a campaign on adult literacy, so right now we have close to 3,000 women who are learning from us, currently we have approx 220 adult literacy desks are working in 95 villages, but the idea is to take it to all 720 villages and to literate those 75,000 adults who are illiterates currently,” said Kaur. Samuday is also working on the issues related to rural solid waste management strategy as itwas enabled by the inter-sectoral approach of the project. As a next step, after making communities open defecation free, there is a need to sustainably manage the solid waste generated in the community. The major portion of this waste is animal excreta. HCL Samuday is working with 5674 dairy farmers, where the waste is generated, and this waste if locally processed could be converted into input for crop production for agriculture intervention where HCL Samuday is again working with 8000 farmers. This strategy is unique and is only being made possible in a sustainable manner if institutions are developed with could engage in such coordination at village level. HCL Samuday is working on strengthening of these institutions which could ensure such synergies. Two benefits could be realized through this, there could be reduction in farm inputs hence cost reduction in agriculture, and there could be an increase in the value being generated through the farm animal. Here there are two critical inputs being provided by HCL Samuday, firstly the technical input is being provided to create a business model around the creation of vermi-compost, secondly the coordination for the same to manage the animal waste, and household waste, revealed Kaur. 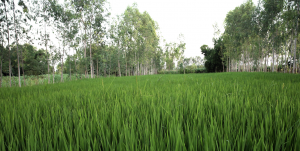